Contemporary and Modern designs have had strong roots in the Metro Phoenix area since the early 20th century, when Frank Lloyd Wright moved his school to Taliesin West in Scottsdale. Paolo Soleri moved to Arizona to work with Wright, then later established Cosanti and the Arcosanti Project, his experimental community near Prescott.

Mid-Century Modernism you find today in Phoenix incorporated elements of the International and Bauhaus styles. It was influenced by Scandinavian design, while being less formal than International Style, and reflected Wright’s use of organic, natural shapes. The emphasis was on open floor plans. Innovative post and beam architectural design eliminated bulky supporting walls and allowed large walls of glass that brought the outdoors inside. With architects of this period targeting the needs of average American families, Mid-Century Modern homes proliferated in the Valley. Whether you are looking for a neo-historic home to restore or one that’s already updated, there are usually a number of Contemporary homes for sale in Phoenix, Scottsdale or Paradise Valley AZ to meet your needs.

As you examine Metro Phoenix you might notice the area’s tradition of innovative Contemporary home design has continued, with many architects designing stunning homes and condos in the Valley. In recent years, some architects have moved away from stark Modern design, towards a more eclectic, friendly style referred to as Post Modernism, while others have taken design in many other innovative directions. Look for diverse, stunning designs in everything from pre-fab homes to condos, with great design work by many talented architects including Wendell Burnette, Eddie Jones, Circle West and Will Bruder.

Plenty of interesting Contemporary homes for sale can be found throughout the area. Neighborhoods of note for Contemporary & Modern homes include Marlen Grove, Windemer in Phoenix near Arcadia, Desert Mountain, Marion Estates in Phoenix, Troon in Scottsdale and Clearwater Hills in Paradise Valley.

Browse through some of these amazing modern gems, currently for sale:

**Disclaimer: we are at the mercy of how listing agents in Phoenix categorize the homes in the MLS. Odds are, you will see some of the homes below and think they aren’t even close to being modern. Contact us or call us and we’ll be happy to help sift through the muck to find you the right modern home.

Listing courtesy of Realty ONE Group.

$364,888
2 Beds ⋅ 2 Baths ⋅ 6403945 MLS ⋅ 1,088 SqFt.
This impeccably well maintained home is darling, hosting 2 bedrooms, 2 baths and inviting pool!Light , bright and open in the highly desirable community of Turtle Rock- Original owner with amazing pride of ownership- Both bedrooms are very spacious with the primary retreat (currently set up as a family room) offering its own access to the patio area and pool. Easy access to all amenities, including parks, hiking trails, freeways, shopping, dining and so much more! Priced well, hurry to make this your next dream home today!

$385,000
4 Beds ⋅ 2 Baths ⋅ 6403558 MLS ⋅ 1,350 SqFt.
Beautiful 4 bedroom 2 bathroom one story brand new home. Open, spacious floor plan flexible living and dining spaces, this property has everything to be easily converted into a duplex if desired (2 bedroom 1 bath kitchen and laundry room), only extend the wall, all the plumbing and electrical connections are in place. Painted with neutral 3 tone colors throughout. Kitchen has top of the line quarts counter tops and new modern appliances including a large capacity three French door refrigerator with family hub. Convenient laundry room inside. Mountain Views. Front and backyard were designed with pavers and beautiful plants to create a relaxing atmosphere. Location, location, location! Close access to FWY 10, 60 ,17 and 202

$975,000
3 Beds ⋅ 2 Baths ⋅ 6400386 MLS ⋅ 2,004 SqFt.
This mid-century modern house has become a twenty-first century beauty, designed for today's minimalist. Stained concrete floors and light grey interior walls set the framework for this light-filled open plan. A glass entry foyer overlooks the front landscaping and opens to a welcoming sitting area and large island kitchen, the focal point of the entire house. Birch cabinets, high-end stainless appliances, a professional gas range and hood located in the island, and custom concrete countertops have all been designed for the chef who loves to entertain. A nine-foot wide sliding glass patio door and custom sliding screens open onto a covered porch with views to the north-facing rear yard and pool. The adjacent living room is perfect for TV viewing and has two large windows. At the far end of the kitchen, the dining room is flanked with custom cinnamon-stained wood and glass cabinets to display your china and glassware. A sliding glass door leads from the dining room to a separate covered outdoor eating area, also accessible from the pool terrace, and additional windows look out to the garden. The rear garden wall is a custom-designed art installation of steel panels, stucco walls and concealed LED lighting, providing the garden with the perfectly lighted ambience for evening parties. The primary bedroom is huge and completely open to the primary bath and dressing room. French doors open to the pool and a view of the rear gardens. The primary bath maintains the theme of stained concrete floors, concrete counters, and polished chrome fixtures. The large walk-in dressing room is fitted out with three walls of built-in cubbies and hanging clothes rods, plus an adjacent linen closet. A water closet provides complete privacy for the toilet. The shower is virtually a glass room with a rain-deluge shower head and single lever controls, finished in large-scale beige porcelain tile with glass details. The two additional bedrooms are served with a hall bath with concrete vanity, full size tub/shower, birch cabinets and stained concrete floor. The two-car garage is finished with new epoxy flooring and is served with an adjacent storage room. A large laundry room/ butler's pantry serves as the entry from the garage to the kitchen and is provided with a large kitchen sink and base and wall cabinets, perfect for unloading bags of groceries from the car. Entire outside of home was just painted. Back deck has been recoated. Unique, modern, open and light-filled and move-in ready!

Listing courtesy of The Brokery.

All information should be verified by the recipient and none is guaranteed as accurate by ARMLS. Copyright 2022 Arizona Regional Multiple Listing Service, Inc. All rights reserved. 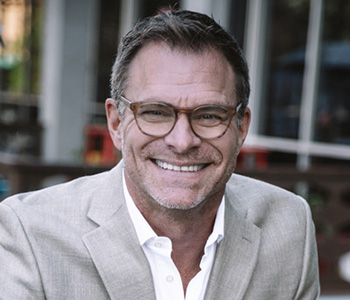 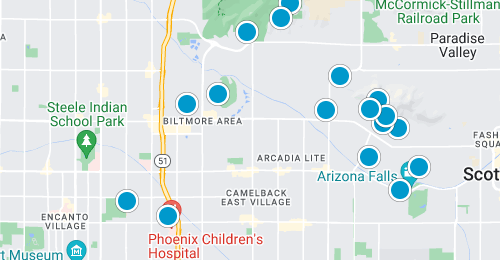